I did it: 4TB SSD with MBR partition table!

I'm sure this isn't unique, but recently I bought 2 Samsung 4TB SSDs (https://www.amazon.c...=gateway&sr=8-1). And then, I had to decide on GPT or MBR, but knowing that MBR would be tricky due to the 2.2TB limit (my understanding is that there isn't really a limit per se, but it has something to do with the sector addressing that MBR can handle, and 512 bytes per sector allocation). But I wanted to maintain compatibility with legacy tools, and MBR is more of a challenge on such a drive.

So I started messing around in GParted, trying out different MB amounts for extended partition /dev/sda2, knowing that it would have to end just before 2.2TB. And GParted kept complaining that it couldn't create this partition beyond a certain sector. It was a bit of a PITA trying to get the #s just right so I would know where it would have to end, took about an hour. And then, the 3rd primary could not be created if /dev/sda2 went beyond a certain MB (even if GParted allowed it). Once that was done, I just set up /dev/sda3 to span the rest of the disk, minus 372.60GB for overprovisioning (10% of the drive's total size).

The drive exposes itself as 512 bytes per sector, so it should be compatible with all MBR-based booting tools, as long as bootable partitions are in the first 2.2TB. I am not going to try to install any OSes on this drive (yet), but only because I have a much faster NVMe SSD that I am using for that. Linux home partitions, data, games etc are fine there.

Later I may repartition it so that /dev/sda3 is an extended containing logicals, if that will work. I think it should work with almost any modern Windows after XP, and most Linux distros. And perhaps a slew of smaller OSes in those partitions (some older, others newer, but I'm sure some trickery will be needed to get them to boot). And the games partition at the end, I placed it there for a reason. It is rather large and can be resized from the right later, to make room for logicals. I just figured it would be best to put the single largest primary at the end.

My screenshot shows the drive in VirtualBox, but I am mostly using it outside a VM scenario. I have been using this setup for almost a month, no issues. All Linux distros I've tried read it fine, and Windows 10 allocates drive letters to all NTFS partitions. But I will not try to use partitioning tools on it outside of GParted. 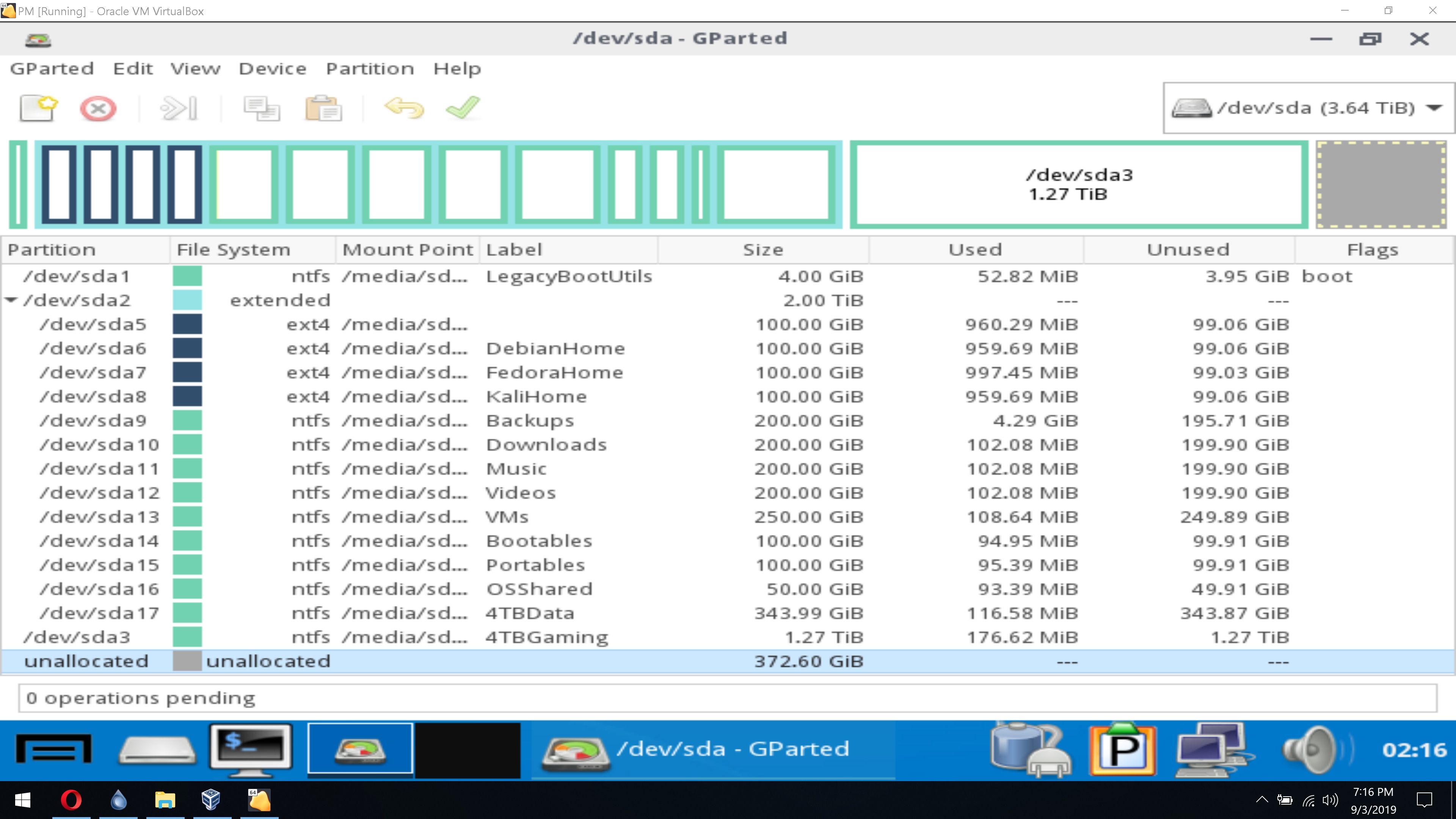 I'm Suprised that Wonko has yet to respond.

I'm Suprised that Wonko has yet to respond.

What should i say?

That's Up Too You. I'm No Mind Reader.

Unless this Is commonplace To You.

Unless this Is commonplace To You.

What should be common place (To Me)?

Using the full extent of a 4 Tb disk with MBR style partitioning?

AFAIK I actually invented it

Tests at the time (made by other people at MSFN) showed that starting from Windows 7 it works fine (not on XP, Vista is AFAICR untested).

The news from this nice thread/report

are (besides that the approach works for Windows 10 and Linux, which was expected) that also the mechanism of the chain of logical volumes inside extended works fine (which was also theoretically expected but AFAIK untested) and that Gparted can be used to create the partitioning scheme.