324 replies to this topic

in my summerholidays I write the driver

Then, nvme boot will work via ntbootdd

for XP SP3 for the Sabertooth X79 board.

I for myself have not the possibilty,

with EWF enabled, USB boot from nvme optane 32 GB, on Asrock board 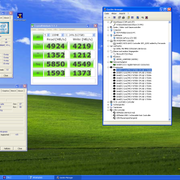 It this optane speed real? Its way faster than even specs.

What is exact model, i tried to find some to buy and there are lots of different models of Optane 32 GB, i dunno which one to buy?

No, some files from optane are load to ram via EWF.

Because of this and only on FAT32

writeprotect boot of XP is possible

BTW i checked X79 pure Dos sound and its working fine with Yamahas and Aureals, when you disable right things for Dos Bios boot profile.

On the Sabertooth X79 board,

only the keyboard works in PS/2.

So, you have to add an USB mouse too.

I looked, if I found my serial

but did not find

I like PS/2 because is more fail proof and its and its working well with pure Dos and Win98. There are some PCI PS/2 adapter, but i never heard that someone made them working with newer MBs.

Today I make a new acpi.sys for XP SP3 32 bit.
It works on AMD, Intel motherboards,
for all languages,

How to use it with already installed system within MPS mode ? Just rewrite the file and reboot with ACPI HAL line through boot.ini file?

I tried this, but without success.

Only the way vice versa (Acpi->MPS) works for me.

And even in this, I do not come back.

A lot of values in registry changed,

when you switch between them

For Z170 MB it worked me, with patched bios. With Z370, i can at least boot with ACPI, after MPS installation, but i still have that some programs are not working issues - probably broken timer.

So that new acpi file is different than modded from registry point of view?

The driver the OP linked to doesn't work for me in VMWare Workstation Player 15 or the latest version of VirtualBox 6. I hope that it can be fixed so it does work in them soon. I am using the driver under Windows Server 2003 x86 with all of the upgrades applied (along with the hotfix the OP mentioned).

The driver the OP linked to doesn't work for me in VMWare Workstation Player 15 or the latest version of VirtualBox 6. I hope that it can be fixed so it does work in them soon. I am using the driver under Windows Server 2003 x86 with all of the upgrades applied (along with the hotfix the OP mentioned).

The NVME driver is a "hardware" driver for NVME devices.

In a VM there isn't any NVME device (unless of course the VM emulates also a NVME device, which I doubt).

VMWare Workstation Player 15 (and its other editions) and VirtualBox both support using NVMe as the controller type (along with IDE/SCSI/SATA).

VMWare Workstation Player 15 (and its other editions) and VirtualBox both support using NVMe as the controller type (along with IDE/SCSI/SATA).

I understand, but that remains a "virtual" controller.

Or, if you prefer, your "it doesn't work for me" means "the driver starts and hooks the (virtual) device properly but I cannot access the device contents" or "the driver does not hook the device and I cannot see it at all"?

And are you actually attaching to the VM a "real" NVME device (as \\.\physicaldrive) or are you attaching an image (as it is normally done) and you want to mount it to a NVME controller (if the second, why exactly?).

What I mean by it not working for me in Windows Server 2003 x86 is that the Storage Controller that it shows up as shows as a ? icon with a status of "code 10" when there's no NVMe devices for it to connect to (when there's one, it freezes on boot or when trying to add it while the OS is loaded). I am thinking that compiling an x86 version by using its source code isn't working properly.

Ok, I thought I was lost before, and now it is worse.

both contain both the x86 and x64 version, but you recompiled from sources?

Even if it seems like I am asking you random questions, they are not as random as they seem, they are an attempt to understand the issue (and/or make it more clear to other members reading the topic), it would probably be of help if you could actually answer them.

If you have two versions of the SAME driver version, pre-compiled, i.e. "as downloaded from Sourceforge" in the SAME version od OS, and the x86 version "doesn't work" whilst the x64 "works", post the screenshots of BOTH versions (the one that is working and the one that is not) of device manager sorted "by connection".

Also, try the 1.3 version (even if it is older it is seemingly more widely compatible):

I just tried v1.3. It doesn't work either. So, it seems to be a bug with virtual NVMe drives.

How do I enable its debug output so I can help get the issue fixed?

I asked another developer who forked the mirror of its original source code if he could get it to work on Windows Server 2003. You can see it at https://github.com/c...vmewin/issues/1.

Hello from Japan.
I have a question.
I want to use NVME SSD with XP SP3 32bit.
(I prepared a Plextor M8PEY with Oprom)
I read the forum, but there is a point that doesn't work.
How to install storport.sys on running XP
(storport.sys version 5.2.3790.4173)
The KB943545 patch is for windows2003 server,
Setup will not start.
Just copy the storport.sys file to the folder?
C: \ WINDOWS \ system32 \ drivers
Is there any other special operation method required?

no more operation is after this copy of storport.sys needed.

When XP recognices a new device in device manager,

just point it to the folder with nvme.sys and nvme.inf in it

PS: On some Bios versions it does not work for unknown reason.

To change the Bios to an older version can help.

Thank you for the wonderful reply!
Unfortunately
It doesn't seem to work well in my environment.
I would like to change the BIOS version.
If you have any advice, please.
My PC specification
CPU AMD Phenom II X4 B50
Motherboard Gigabyte GA-MA785GT-UD3H-rev-13
OS Windows XP Pro SP3
NVME SSD Plextor M8PEY
(NVMe PCI Express PCIe HHHL: Oprom- UEFI and Legacy boot suport)
thankyou for regards

Any progress for X79? Summer is gone for long time.