At the Flash Memory Summit, as reported by Golem.de, Samsung showed off a server with 48 of these new SSDs, with a total storage capacity of 768 terabytes and performance rated at 2,000,000 IOPS (input/output operations per second). By comparison, the consumer-grade SSD that you have in your PC is probably capable of around 10,000-90,000 IOPS, depending on the workload. 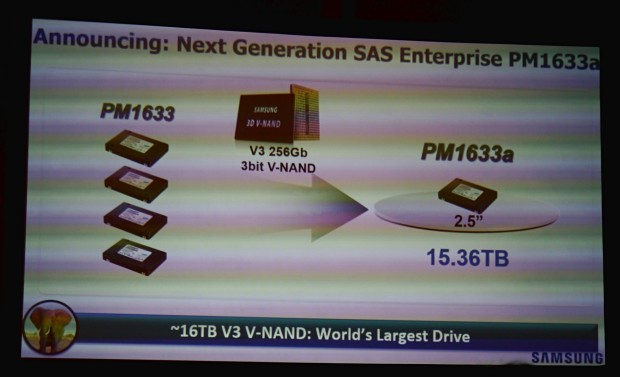 RAID is already fast, can only imagine how such an array based on SSD will permit copying terabytes from one place to other like butter. Supposed price is 7000 USD per drive, but within some years we should get these cheaper..

I'll just wait for the 32 TB ones to come out and buy these measly 16 TB ones on sale.

but, if 2-5 TB comes, and this promises it, want it very cool, because,

then slow down the hard drives no longer the systems,

because, the technics of the hard drives it's really overaged and outdated ..

Well, let us hope that the disks market changes in the coming years.. couple years ..

because, i have not seen to take distance WeaternDigital of from theirs Helium on it and take not the chips of ssd's

because, i bet, they're avoid the conversion to chip-relate Harddisk, because,

then they would have to admit that they

1. have ruined the last years money

2. no longer in the time are

3. have failed to move with the times

well, if this goes so further, would goes some Factory's in any case crashed .

and by the way, i need only a 5-8 TB for my Basement as private Person..

(without archifactal intelligence and "boddy beeming" like in Enterprice, then maybe much more)

and have make brain games with an comrade about 1TB harddisks if they're comes .. ohh hooly sh....

And now, we are on the situation in this time with the possibility to have more as 1TB today ..

well, i hope the other Factorys developing slowly with and

create possibility's with tesa (the "german" tape) and

Cristal harddisks because.. the mechanical haddrives be really outdate..

so far as flashback in memories of the past..

and now we are spin along /race to the future ..