35 replies to this topic

Try this with somebody on the street now: Give them $1 000 000, or give them something of equal value. (Now depending on whether or not they are interested in the equal valued gift... They may like it, but not as much as being able to choose what this money does for them instead.

Yep, sounds logical and if we were all robots or computers, the world would probably work this way, but we're not. We're humans and humans are not driven by logic, they are driven by needs. Needs that were installed into us, aeons before anyone even thought about, that one day, there would be a thing called money.

Just ask yourself, how much money would i need to pay your best friend, to leave your side in your hour of need and you know, how little money can acomplish.

"We're humans and humans are not driven by logic" - Well, that depends on perspective I guess too. Even mistakes could be a result of some concept of logic; not enough experience to not make that mistake, etc...

needs are a form of logic to me, but here i'm thinking this way because of my programming background. If we need to do something, it's logic that convinces us to do it or that we require it.

Keeping in mind, that needs do change over time for humans (like any other living thing that needs to adapt to it's environment and surroundings)... Evolution, and not just in it's physical form by definition. So here: "Needs that were installed into us, aeons before anyone even thought about, that one day, there would be a thing called money." - This implies that we're talking past tense, in which money was not a requirement because it was not needed back then. Now/Today, it's a social status that represents 'power' to some people, and behind that ideology, I believe it's mostly greed. People that are poor would like more of it to 'just get by' but people that have the amount in which some people can only dream of, also would like more. (I haven't heard anyone desiring to have less money, it's always been a quantity of 'more', unless that person has enough to live comfortably, but my point against this is: If we gave those people more money, would they deny to claim it? If they did, it's probably dealing with some psychological phenomena, to which i'd have less knowledge about (depression about somehing, etc...))

However, I guess it could be BOTH fear and greed. Because depending on which side you're on.... Have's or Have Not's... If you've got enough money that you don't have the fear of going bankrupt, then you may be driven by greed to have more power; money. Otherwise if you're on the poor side, you may just be wanting enough money to get by, which would be motivation by fear; becoming homeless.

It's beomce quite a debate lol. But i'm willing to settle with what I've posted in this thread here. Motivation is based on perception, thus it's unique from person to person.

I do not disagree with you though, I can see your points and I never would've thought about it that way, being a taxpayer myself lol. Although I now think it's lots more complex than words can describe, being a result of a multitude of things in a complicated formula probably not worth trying to solve... Therefore, as I originally thought, "greed" could be part of it, but not the only aspect of it.

the end of the world is nigh,

Sounds like the millenium, alleged computer meltdown,computers couldnt do it but greed tried.
But still the Bios is safe, criteria is that everyone has to comply, including linus.
The Matrix has nothing on this.
Think::
Just keeping death alive,i.e Life on Mars.
Or on a serious note does the BIOS (tweaked but unscathed) has, to be the way it is in 2012 ?????
It appears irreproachable

I guess Im asking if something designed last century is still doing its Job Now ???

Or I guess I'm really saying it should be programmable so the machine complies to us not reboot.pro complying to the machine...

Don't worry my friend. I am quite sure that we will all stay around for some few additional years.

According to my findings, since the Maya culture that "Reboot" means the loop of a life cycle and therefore understood by the ancient as something that is eternal like the sun, the sea and the wind.

Recently, I noted that reboot is only due to expire in 2021. If the ancient folks were warning about the end in 2012, they might have been speaking in code since 21 is the reverse of 12 and why other reason would reboot.pro ever be see an expire date in 2021? Coincidence? I don't think so.

I don't know C code, but I suspect that Grub4dos and similar crafts might give more clues about the end of days. If we test them with a value past 2021 they will not boot at all. Try it!

I have'nt got the aswers but lots of questions??
It still appears to me that we workaround the limitations of the BIOS as defined and redefined since the early days of computer conception.
It appears to me to be the only area of computation untouched (dare I utter these words ( as an anti christ)).
After all the bios is the "coal face" between man and machine and everyone knows that mining made many changes throughout its history, it evolved.
Yet the basic interaction from the early days (l.e memory, storage, power has changed massively.)
We all know of iisues with some bios's yet accept them "as so".
Why.
We understand how people can build around a 'Moribund' system.
Why
etc,etc you know the arguments !
Jumped off my soapbox now.
The question 'Was there Life On Mars' or Earth for that matter?
Or because of the int something h or chs or lba it can't ????
It should be part of the program written into the Bios to protect us idiots.

I have litteraly no idea, what you're talking about. BIOS with coal in its face?

We all know of iisues with some bios's yet accept them "as so".
Why.

Don't know about you, i don't.
I fixed some of my BIOS. Two to be exact.

But i can't fix the whole world, for all those lazy bastards, who don't fix theirs.

One can setup ones own computer to perfection.
And since the dawn of PE, we can even transport a properly configured and setup OS to another computer.
Still that other computer will never ever get proper hardware or be as perfectly setup as we would do it.

@MedEvil
I think somebody slipped something into my cigarette, I'm O.K now.

You cannot resist a kitty. 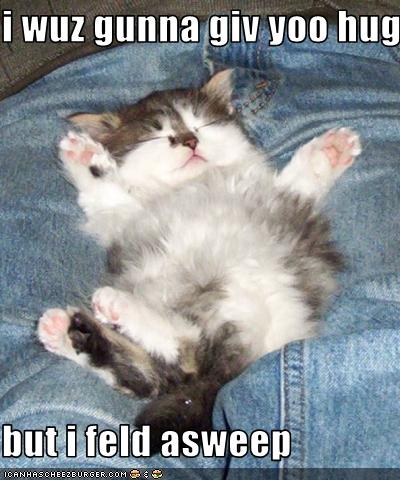 Up here, we tried daylight savings in queensland. however, it never returned, because of two reasons.

1. The cows would not come to milking an hour earlier
2. The extra hour of sunlight faded the curtins.

Cows being smarter than people, isn't that one of the signs of the coming apocalypse?