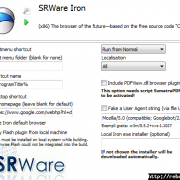 SRWare Iron is the browser of the future—based on the free source code “Chromium”—without any problems at privacy and security.

This script supports current 32 bit Iron versions and has been tested with v19 to v32.
Confirmed working with Win7PESE and Win8PESE.

Requirements:My script has been developed for maximum convenience. Set everything you want to, and display various file formats in the browser.

Please note: This script is discontinued!

You can now use Chrome extensions, the script will integrate it in your Iron build!

Please check that out, I'd like to get feedback which extensions you integrate and whether they work.

Unfortunately, the extension feature isn't working any more. For the nonce, that option has been removed.

If I can figure out automated policy deployment for WinBuilder (experts please!) I might be able to reenable it.

I'm not understanding very well what you mean. Do you mean converting your script to work with winbuilder 2013 and above?

If so, it is possible to do this but the language is changing considerably at this moment. It is better to wait until we release a new update where plugins are already better defined in terms of syntax.

Do you mean converting your script to work with winbuilder 2013 and above?

No, I meant a possibility to script the integration of Iron/Chrome extensions for WinBuilder (082) scripts.

At the beginning of the year there was a straightforward method with Registry data that was easy as pie.

The dynamic part could be done with a small AutoIt script. To my utter annoyance, Google put a stop to it, supposedly due to security evaluations.

Google suggests using a Policy method described here and there, however, I haven't the faintest idea how to use this technique for WinBuilder. I doubt it to be feasible...

It doesn't seem to be an officially supported method by Google, just by a guy (possibly working for them?) that does not represent the company officialy.

Perhaps the guys at Portable Apps have already found a solution to the most recent editions? Might help to look at their most recent release (current on version 30 too) and check if addon support was enabled there.

I also don't have many more ideas on how to solve this. The whole process just seems to be getting way too complicated for installing addons. Then again, Chrome (google) has always been quite "resistent" to allow people adding extras. Particularly because of the no-script plugins that remove advertisement from webpages.

That method is documented here, seems to be "official". But I consider it to be not feasible.

Mozilla does far better regarding deployment of Firefox, Chromium does just poor...

What I'm after is offering users the option to choose a folder with extensions (*.crx) and let a script do the rest, i.e. parsing and writing the needed settings. That way, we can equip the browser with (pre-configured) extensions the way we like.

From what I read, you need to manually prepare a text file with the correct permissions for each addon. From a first sight it doesn't seem feasible to enable users dropping their favorite addons in bulk to a folder that would be processed.

I've never wrote a chrome addon so I don't know if the permissions that need to be specified are written inside each addon and how difficult it would be to interpret them to then generate the "answers" file allowing these addons to run.

However, it is feasible to hand pick a few addons and make them available as possible alternative.

In a first try (< Iron 26), I used an executable named crxid (provided by a nice guy who compiled a c# source for me) for the extension's id and the version information out of manifest.json and was able to build the relevant deployment commands with it.

As the permissions you mentioned are in json syntax, I don't see a way to automate this fully (even with a superb tool like jq).

I like Iron for its speed compared to Firefox, and I loathe it for its mediocre configuration/deployment.

And I'm afraid that Mozilla will follow the same path in upcoming version 26/27 featuring a new GUI scheme (as Opera already did in version 15).

Back to App Scripts

Also tagged with one or more of these keywords: win8pese, win7pese