alacran
View other files from this member 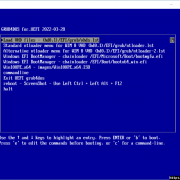 But when dealing with Windows VHDs there are certain features Ventoy lacks:

This project was made with the idea to add to our Ventoy USB device all features Ventoy lacks, and improve the versatility of our multiboot USB device, by means of chainloading to grub4dos for MBR/CSM or UEFI respectively, that works fantastic when dealing with Windows OS installed VHDs.

Just extract the content of each 7.z file in the respective partition, a complete Layout with some empty folders will be avilable in your Ventoy partition, each folder has instructions to use.

alive's grub2 File Manager can be loaded directly from Ventoy Menu, or from grub4dos in MBR and UEFI environments.

When extracting the Ventoy_partition.7z, in case you are adding it to your current alredy made Ventoy USB device with all your ISOs and VHDs, allready there, there will be no problem, to preserve your personal settings in your ventoy.json, file, it is not present in this package.

Grub4dos MBR and UEFI versions and their respective menu.lst config files will be available when booting from Ventoy, just by pressing F6 and selecting to run.

Also the Ventoy plugins for booting WinPEs and Win10 VHDs were included for users convenience.

Additionally my FD-VHD-Loader-USB_x64 and Load_Ramdisk_x64 programs are available to be run on demand, from Ventoy partition root, instructions into VHD_from_USB and RamDisk folders respectively.

NOTE-2: Load_Ramdisk_x64 program requires to have previously installed ImDisk v2.1.1 by Olof Lagerkvist, or as a bare minimum v2.0.10 into your WinPE or VHD to make use of it.

Hope you enjoy it as I do. 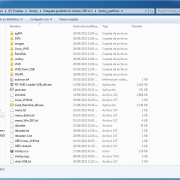