27 replies to this topic

There is a new thread on MSFN about a new PE Builder project (open source) compatible with our good old WB 0.82:

Just tested it and it is very fast.

Looks like a good tool, in the end I think that language or correctness are the least of the worries. The focus should really be more about making simpler projects that work well for end-users.

I would be thumbsup to open a forum section here for the new tool and help with the visibility portion (e.g. newsletters) in case the author sees interest on that possibility.

, in the end I think that language or correctness are the least of the worries. The focus should really be more about making simpler projects that work well for end-users.

Still in denial mode, I see.

The end-users are (largely, of course not all of them) a mass of selfish leechers that simply press the green button, they get a .script/project written by a .script developer and run it.

The issue has been traditionally the difficulties that good willing .script developers had to face to write something working [1] and the initial very steep learning curve for the (anyway very few) end-users attempting to become .script developers and hopefully giving back something to the community.

Nothing is overly difficult or impossible, as it was demonstrated by our good friend Misty

[1] ... having something working AND actually having it written in such a way that a new, good willing padawan can actually read it, understand it and learn from it would be a plus...

...Nothing is overly difficult or impossible, as it was demonstrated by our good friend Misty

I'm actually blushing. You are too kind.

I'm actually blushing. You are too kind.

Naah, I am still an old and grumpy bastard

(and cheap, but this is unrelated), maybe I am softening a bit with the years passing by

Thanks to all who reported unknown bugs!

Changelog
- Fix TXTDelLineOp optimization bug
- Fix NullReferenceException in System,RefreshInterface
- Disable System,SaveLog when logger is turned off
- Recognize "PathSetting=False" in "script.project - [Main]" and disable path setting.
- Prevent possible UI exceptions.
- "[Main] - Description=" line is no longer mandatory in plugin.
- CodeParser.GetNextArgument will not slice argument with "".
- Support legacy branch condition when compatibility option is set.
- Support 4-argument 0x7 RegWrite.
- Do not touch escape characters when setting variables.
- Ignore the plugin itself in "[Main] - Disable" directive.
It fixes a bug VMWare.script is uncheckable.
- TXTReplace will be optimized to TXTReplaceOp if condition is met.
- IniReadOp will set varible to empty string when key is not found.
- Do not escape variables imported from interface.
- Pressing Update button of LogWindow while building no longer crashes program.
- Log stdout and stderr in ShellExecute,Hide.
- Implement ShellExecute,Min.
- Implement GetParam, PackParam.
- Implement "#a" to track section parameter count.
- Allow "-" in variable name, for compatibility with Gena_Meal.
- Fix IOException in CopyOrExpand.
- Fix UIParser to recognize tooltip in TextFile

1. Update to .Net Framework 4.7.1
PEBakery uses several libraries.
Update of some library caused PEBakery to malfunction (problem with .Net Standard 2.0), so I had to update .Net Framework to 4.7.1.

3. [New] parameter count token #a
To deprecate PackParam, #a token is added.
When used in command, #a denotes section parameter's number.

And to keep things together, my feedback re PEBakery elsewhere on reboot -

On the other hand people runing last version of Win10 already have it into OS and then PEBakery is a very good option for them.

@alacran
I attempted to run PEBakery on a Windows 7 SP1 host OS after installing .NET Framework - a tremendous ammount of bloat (.NET - not PEBakery). Unfortunately this was the wrong .NET package and the program failed to run with error PEBakery has stopped working (see screenshot below) - 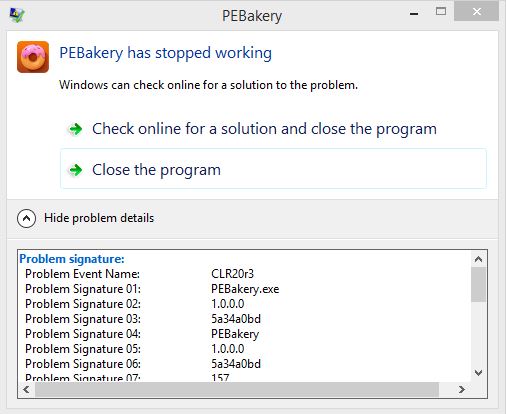 Same error on Windows 8.1 Update host OS. No warning about not having the wrong .NET Framework version - just the error.

Started ok on my newly installed (for testing purposes) Windows 10 host OS partition. Also now running on Windows 8.1 Update host OS after installing the correct .NET package. A warning about an incompatible version of .NET would be useful.

I haven't played around with PEBakery much due to testing recent additions to MistyPE. First impresssions - a very very promising bit of software.

Brief note on PEBakery compatibility with MistyPE - it's not working with all project scripts.

Tools > Cache Files - Option 3
This script is used to create a Cache using files copied from the host OS. Using PEBakery the script fails to copy required file dependencies to the cache. This is likely to be due to failing to redirect to the Sysnative directory. The Sysnative redirects are required in the 32-bit WinBuilder, however if PEBakery is a native 64-bit application then the current coding will fail and will need some significant changes to work in PEBakery and WinBuilder. I'm not sure how many project scripts are affected and will check this shortly.

Just ran one of the new MistyPE package scripts and discovered the nice code "Syntax check" function built into PEBakery.

Just posted in the PEBakery thread on MSFN

Found a problem in MistyPE.

If the Options 2 tab is selected in the main project script (with settings for Build Method, Keyboard Layout, etc) then the build fails. Clicking on the HELP button for Option 7] Build Method also fails.

The error appears to be due to the content of the message in the [HELP.7] section of the script. I can't actually see what code in the Message is causing the issue and am about to leave for work. Not sure if it's my code or a PEBakery issue.

Looks like a good tool, in the end I think that language or correctness are the least of the worries. The focus should really be more about making simpler projects that work well for end-users.

I would be thumbsup to open a forum section here for the new tool and help with the visibility portion (e.g. newsletters) in case the author sees interest on that possibility.

I have encouraged ied206 (aka Joveler) to maintain a PEBakery thread on reboot.

If he does decide to do so then please extend him a friendly reboot.pro welcome.

I fully support any discussion on PEBakery - I'm seriously impressed with ied206's work and truely excited to see how it develops over time. It would be nice if it led to a new projects here using the skills and talents of our members.

ied206 has opened threads on a number of forums including msfn, mdl and a very active PEBakery subforum on theoven.org. The developer himself remains neutral and continues to do some fantastic work.

I respectfully ask that anyone posting here at reboot do so respectfully and professionally and remain neutral about posts on any other sites.

What is PEBakery?
PEBakery is a builder specialized in customizing Windows PE.
It is intended to be used with Win10PESE, MistyPE project.

Hello, I am a developer of PEBakery (@joveler at MSFN).

Although WinBuilder 082 is discontinued, it has been powering several projects.

I hope PEBakery paves an easy path for users and developers.

1. Improved Console Output in ShellExecute,Hide
PEBakery will display and log stdout and stderr as unified one output, to simulate real console print.

3. WimMount, WimUnmount
Native commands for handling wim files are being added.
WimMount and WimUnmount depends on wimgapi, and the other commands are planed to use wimlib.
See manual for usage.

Am I unable to add a link?

Am I unable to add a link?

Unfortunately you cannot add that link.

But these will do

Hello, I am a developer of PEBakery (@joveler at MSFN).

I would say: "The developer"

I would say: "The developer"

Sorry for my bad english, I just missed it.

No problem, I just liked your modesty!

I can't speak for anyone else, however I'm loving it!

Wellcome, I have followed all your threads in MSFN and MDL, your project is evolving very fine and very fast, it is good to see you call it now Beta 1.      You need to have a certain number of post in order to have full capavilities for modify one of your post and to do some other things.  Anyway the forum software do not acept links to -t h e  o v e n-

Where is this written and described ?

Where is this written and described ?

The answer to both is: I don't know.

But in case you don't believe me you can test this by yourself.

In the past there was boot-land.net and many of the members got on happily reasonably well together. Then there was a (bigger) falling out and a number of members left and formed theoven.org, with reboot.pro rising like a phoenix from the ashes of the mighty boot-land.

This forum history is no doubt written somewhere. As Nuno is not one for censorship (and is in my opinion a very fair admin that we are extremely lucky to have) then the reasons are likely to be out there - written across multiple topics no doubt.

For many members this all occurred before they joined reboot.pro. I have stumbled across the odd topic with references to the history and arguments. Whilst there are others that could probably provide some more detail, dragging up the history would not serve any real purpose and would do more harm than good.

For whatever reason though, a decision was made at a senior level to restrict (block) any links to theoven. It would be nice if after all this time the restriction could be lifted, however that is not my decision to make.

The answer to both is: I don't know.

But in case you don't believe me you can test this by yourself.

I think that one cannot (reliably) state something for which cannot give a (minimal) explanation...

However, let's wait for some clarification from someone (more distinguished here in the forum)...

Looking at the forum settings, I can confirm these are blocked.

It is up to the moderators to decide whether or not this restriction should be taken off.

thanks for the clarification.

I completely agree with your position, as (at first sight) the restriction looks like too much despotic...

Back to PE Bakery

Also tagged with one or more of these keywords: pe builder